The spine is made up of vertebrae stacked one on top of the other. This arrangement of vertebral bones creates a canal that protects the spinal cord and nerves, which travel through this canal carrying messages in the form of electrical impulses between the brain and the muscles.

The disc is the joint that connects the vertebrae and acts as a cushion and shock absorber, allowing the spine to bend, twist, and withstand loads. The disc is flat and round and consists of two parts: the annulus fibrosus (the tough and flexible outer ring of the disc) and the nucleus pulposus (the soft, gelatinous center of the disc).

What is a Herniated or Bulging Disc?

A herniated disc occurs when the gelatinous center presses against the fibrous wall and pushes through to compress the spinal nerves or spinal cord, which can cause mild to severe pain and spinal dysfunction. Herniated Disc pain is described as a burning sensation or like a  puncture wound and can spread through the lower extremities. Other symptoms may also be associated with a herniated disc are weakness and numbness in the neck, shoulders, arms, or legs, depending on the location of the herniated disc. 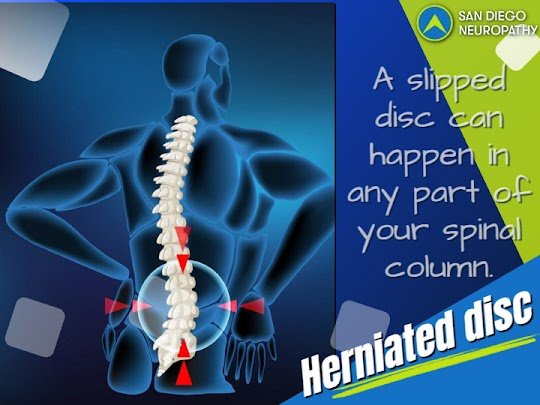 What Causes a Herniated Disc?

The leading cause of herniated discs is associated with the natural aging of the spine. As we grow older, the nucleus pulposus begins to become less hydrated and therefore weaker, making it difficult to carry the loads from the vertebrae as mentioned above. Routine activities such as using your back muscles to lift heavy objects instead of bending your legs can cause a herniated disc. The lumbar discs swell and rupture faster, followed by movements such as sudden heavy loads that follow the cervical spine. Being overweight also puts a lot of pressure on the lumbar disc, which can wear out if constantly lifted, pulled, bent, or twisted over time and tears. Disc hernias in the thoracic spine are less common. Other causes may include hereditary or congenital abnormalities.

Symptoms of a herniated disc depend on the level of the spine where the herniated disc occurs. Symptoms generally include pain in the area of ​​injury, numbness, weakness, tingling, and muscle cramps. If the injury is in the lumbar spine, the patient describes symptoms such as abnormal sensations and movements and pain that spreads to the buttocks and behind the legs (sciatica). Herniated discs in the cervical spine are very common and cause symptoms such as pain in the neck, shoulders, and shoulders and weakness in the elbows. Disc degeneration has atypical symptoms that can be more difficult to analyze. Thoracic disc herniations are commonly asymptomatic. However, in some cases, symptoms are shown such as localized, axial, or radicular pain and motor impairment as the two most common symptoms. 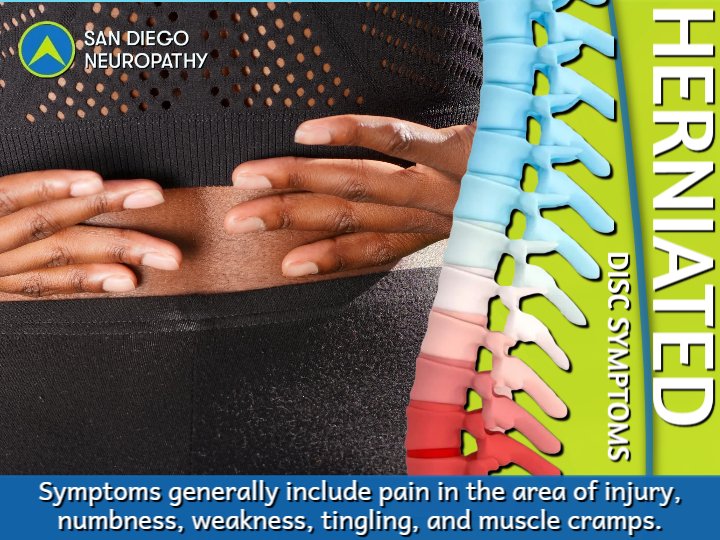 Can Herniated Disc be treated?

Once a herniated disc is diagnosed, most people can relieve symptoms with simple, non-surgical treatments. Some people find that resting, avoiding sitting for long periods of time, and taking breaks during the day can help relieve pain. Pain relievers, steroids, and anti-inflammatory drugs can also relieve symptoms. In some cases, heat and/or ice therapy can help reduce pain and inflammation. Non-surgical spinal decompression is a therapeutic method that creates negative pressure on the spine by gentle stretching, helping to relieve pressure in any area of ​​the spine: neck, lumbar, thoracic, and sacral, offering effective treatment of low back pain, neck pain, and sciatica due to disc herniation or disc degeneration. It is a painless therapy based on spinal traction treatment. Non-surgical spinal decompression is a safe, economical, and highly effective alternative to spinal surgery. It is used to treat spinal problems such as sciatica, spinal stenosis, degenerative disc disease, and related conditions. With spinal decompression, the body restores health by effectively repairing damaged discs, helping you feel better and healthier.